Following a Select Camp hosted by Trax Sports in conjunction with Tip-Off Sports Vikings from 1-3 November 2019 at St David’s Marist Inanda and Mandeville Indoor Centre, where 10 athletes were selected to tour Washington DC, USA. The contingent had the pleasure of going to the US from 3-9 March 2020 to attend the Trax Sports Global Skills Invitational –  a week of basketball, exposure, diplomacy, and fun. Each athlete had the opportunity to learn and grow from this experience.

The delegation consisted of the following members:

Programme in Washington DC
The programme consisted of the following activities that were lined up for the week:

USA Arrival and Dinner:
With the team traveling a combined 26 hours from Johannesburg (OR Tambo airport) to Washington DC (Dulles airport), connecting via Hartsfield–Jackson Atlanta International airport. We checked in at the Best Western Plus Rockville Hotel & Suites in Maryland.

After checking in we had dinner and then continued to a reception evening with Coach Rick and other coaches where players received gear and apparel for the week.

Wednesday, 4 March 2020:
We had coach Desmond Dunham (Nationally acclaimed track and field and cross-country coach and local youth sports expert) who focused on speed and agility drills incorporated in basketball. The boys were also given elastic bands and balls after the training sessions where they were encouraged to continue building these aspects into their personal training on a daily basis. 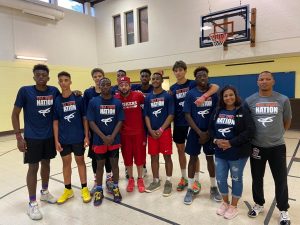 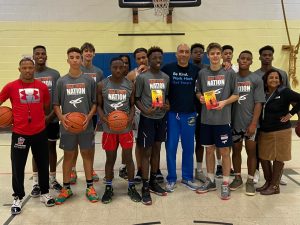 Saturday, 7 March 2020:
Coach Brent Bass, author of “Bassketball Lessons” and Athletic Director at E.L. Haynes Public Charter School in Washington DC facilitated our last basketball training session where he also had questions and answer sessions about the book he wrote and gave to all the boys. He also personally wrote welcome messages in the book. Some of the boys from his school also joined the training session with our boys. 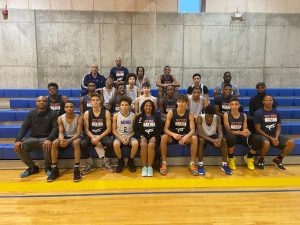 Group picture with Junior and Senior players and staff from E.L. Haynes after scrimmages on 4 and 5 March 2020.

We were honored by Idea Charter Public School with a closing dinner and socializing after our last match for the tour where the boys had an opportunity to once again talk with the boys from Idea and share contact information.

It was very good for the boys to wind down and learn more about Washington DC and its surrounding areas between the basketball schedule to afford the boys a more holistic experience on the tour.

Tour 1: Annapolis State House Tour, Annapolis Maryland
This was our first tour during the trip on Day 1, which we had to travel slightly outside the DC area to visit the State House.

Some of the team members posing with a statue of George Washington at Annapolis State House in Maryland, 4 March 2020.

Description:
Oldest American state house in continuous legislative use. U.S. Capitol from November 26, 1783, to August 13, 1784. Historic legislative chambers with an exhibit about General George Washington resigning his commission, and statues of Harriet Tubman and Frederick Douglass that was only installed 2 weeks prior to our arrival in the United States. On Maryland’s Frederick Douglass Driving Tour. 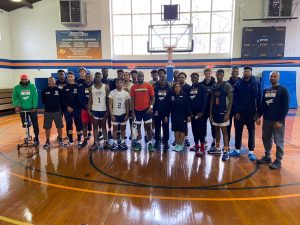 Tour 2: Washington Adventist University (WAU) Basketball Practice
We were afforded the opportunity by Head Coach Patrick E. Patrick Crarey, II who is in his 10th season at WAU and was also awarded the Coach of the Year award among all other sporting codes at WAU, to join his basketball practice as observers. He also watched our training session earlier that morning.

Description:
The boys had the opportunity to watch a university practice session as well as their entire scrimmage session. The boys afterward had the opportunity to meet and greet with the WAU players after training, ask them questions and also exchange contacts. Coach Patrick then ended our visit with a talk to the boys about what to expect at universities in the US. The boys asked a few questions as we had to rush off to another scrimmage session at E.L Haynes Public Charter School.

We had some free time on Saturday because the schools were closed and we had no matches to play so we visited 3 remarkable landmark sites. First up was the Washington Monument.

Our 3rd tour for the day that lasted for more than 3 hours was a tour at the N.M.A.A.H.C.

Description:
The National Museum of African American History and Culture, in Washington, D.C., cuts a striking figure on the National Mall: the building juts up from the ground in sharp angular tiers, and its exterior, blanketed with bronze-colored aluminum latticework, appears from a distance as a textured brown—making a sombre, almost brooding contrast to the bright white buildings around it.

The structure, designed by the architects David Adjaye, Philip Freelon, and J. Max Bond, Jr., was inspired by Yoruba crowns from West Africa, with the openings in the lattice meant to invite in the sunlight. 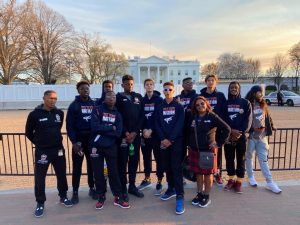 Tour 5: Washington DC White House
Apart from visiting Pentagon Mall in DC we opted to take a walk around DC area and go to the Washington White House to view from the front as well as the back.  That was the cherry on the cake on our last site for tours as the boys had an opportunity to witness some Secret Service agents near the White House. We could not take pictures with them but they were willing to be in the picture from a distance.

Above and beyond having great training sessions and amazingly informative tours, the boys ultimately had an opportunity to also visit 2 college basketball matches and 1 NBA match. 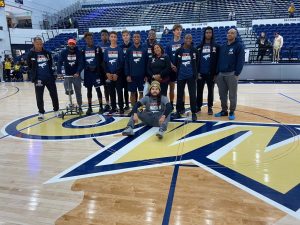 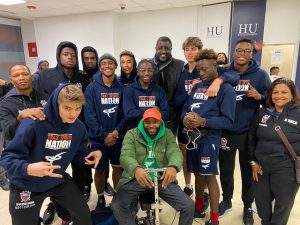 Thursday, 5 March 2020Match 2: NCAA Division I Basketball
Howard University Bison 88 vs 100 Delaware State Hornets
It was indeed an honor for us to visit a match at the Howard University, since that it is one of the most iconic campuses that has produced some of the most Iconic African American artists and celebrities in American history such as Sean “Puff Daddy” Combs, Taraji P. “Cookie” Henson, Chadwick “Black Panther” Boseman, to name a few. But most of all the boys had the privilege to meet and greet with a retired NBA professional, Walt Ander “The Wizard” Williams who was a 1st round (7th overall) pick for the Sacramento Kings. 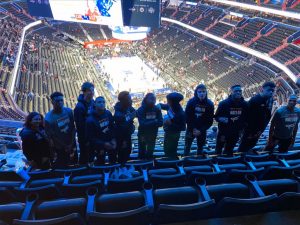 After NBA Match, Wizards vs Hawks, 6 March 2020 at Capitol One Arena.

The boys had the time to watch the teams play and also had a chance to meet with the players from Fordham Rams afterward for some meet and greet. One of the players, Freshman, Kyle Rose, is one of the players that Coach Rick coached and assisted in his process to College Basketball. 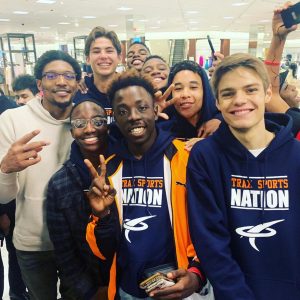 If everything shared above was not enough, the boys were very lucky to meet Bradley Beal after waiting in a long queue at the Pentagon Mall where Bradley Beal had a meet and greet with fans. None of the boys had tickets to be afforded the opportunity to get through for a meet, greet, pic and signing because it was a mere coincidence where we heard that he was doing the signings at Nordstrom store in the Pentagon City Mall. The boys insisted to wait and “Try-Their-Luck” to see if he’d be willing to take a pic with us. As he finished up and was about to pass on his way to the elevator with security and his crew, one of the boys pulled the All-Time African-tourist-fan card and shouted; “We are from South Africa and we flew for 17 hours, can we please have a picture with you”. Yip, brother Beal turned around and obliged, all the boys lost their minds as Beal posed for the pic while throwing in a complimentary high-5 as he approached us. Some boys vowed to never wash their hands again. Well… we know that promise was short-lived after our training session later that night. 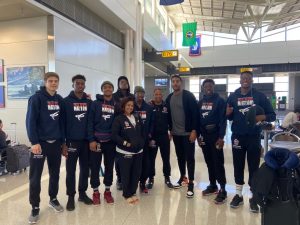 A great closing to an already hectic tour was the boys meeting current Fox Sports basketball analyst, Jim Jackson, and retired NBA 1st round (4th pick overall) guard drafted by Dallas Mavericks in 1992, at the Dulles International airport at Washington DC as we were about to embark on our journey back to connect to Hartsfield-Jackson International airport in Atlanta. He was kind enough to take a pic and have a brief chat with the boys while we were waiting for our flight.

A big Thank You is surely in order to Coach Rick Smith, his family and all the Trax Sports staff members for all the organisation throughout the tour. The boys and staff surely enjoyed the tour while learning so much in the process.